I have needed a general purpose blog for posting items that are off topic for my genealogical blogs. My webmaster, Kathryn, started setting it up, but we hadn’t yet decided what the first post would be. I wanted this blog to be upbeat and optimistic in tone–to reflect my view of the amazing world we live in–a world given to us as a gift.

A while back, I told Kathryn about the new robots we were installing on my family’s dairy farm (Eakle Enterprises, est. 1969). We are an organic farm and this was one of our steps to increase the income to support several growing families.

Ever since, Kathryn has been anxious to visit the farm and see first-hand “how on earth” (her words) a robot could milk a cow without human intervention. Last weekend, she arrived, camera in hand to take pictures. Later, she suggested that this would be a great subject for the first post on Be Of Good Cheer, and offered to co-write this inaugural post.

Kathryn says: I’ve captioned all the pictures I took. What I learned while taking pictures is that robotic milking is a 24/7 process. It took about a month to train the cows to “milk themselves.” The cows actually line up to take their turn at one of the four robot milking stations. The hay they eat is pesticide-free, and while milking, they eat organic feed. Each cow wears a computer so the robot knows “who’s who”.

The teats need to be clean – especially since the snow and mud are making the cows pretty dirty this winter. So the first thing the robot does is brush each teat, one at a time, then the “suckers” latch on to the teats to milk them. The milk continues through individual hoses to the robot’s collecting tank, where it’s tested for bacteria, sediments and other impurities before heading to the main tank. The robot tells the computer not only how much milk, but how much per each teat!

The four robots send statistics to a master computer that stores all kinds of information. On one of the pictures, you can click on the image to enlarge and see an example of the detail. The milk goes from the individual robot collection “jug” up into the ceiling, across the milking shed, and into the main tank, and then collected by the tanker truck. 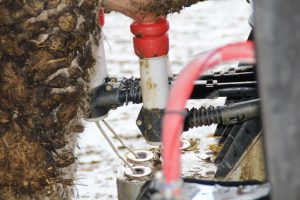 The robot latching on to one of the teats

It  took three years to make the change: growing organic feed in fields that had been originally treated with pesticides, acquiring cows that had not ingested pesticides, and contracting with a new company to buy the milk.

Adding robots to the farm was an investment in expanding milk production. Contented cows give more milk more often! And the cows love the grain ration the robots supply while the cow milks.

Future plans include a viewing platform for visitors–since we are one of only three dairies in Utah milking with robots. And a milk processing plant to re-establish the Sunlit Dairy which the Eakle family operated in the 1930’s. Exciting times for us.

“My other hat” has our new logo designed by my granddaughter Chelsea Fisher. She will add the Sunlit Dairy information to it as we re-launch. 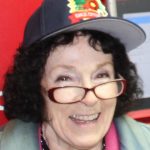 Hope you enjoy hearing about the “other” hat I wear in addition the  my genealogy one.

This entry was posted in Uncategorized and tagged Eakle Enterprises, Milking with robots, organic farming, Sunlit Dairy. Bookmark the permalink.