On the south side of my home is a built-in planter. It is quite shallow, and to fill it with much water causes leakage into my basement. [Not fully sure why that is since there is a rather thick wall between them.] So I don’t plant flowers here. Just bulbs that come up in the spring. And Spearmint.

The planter has been full of spearmint–such sweet-scented green spearmint. Every year–Until July 2017, when it all died. Turned brown and died. I have lived in this home for almost 25 years and nothing like this has ever happened before. I have had to cut the mint back for the winter.

An infestation of bilbugs in my yard the past three years has led to my spraying the whole south side of the house to kill the bugs. Not supposed to injure the lawn or shrubs. Evidently, thick spray, applied at least three times each season took its toll. The mint died.

Then one hot August day five, then three more, and finally one more green stalk appeared. They grew by inches an hour! At the top of the stalk was a small, flat head. When they reached two feet, the heads opened into the most glorious lilies.

Gold and pink, with faint periwinkle blue at the ends of the petals. Nine of the most beautiful lilies–no green leaves, just stalks and flowers. Each head had a cluster of flowers. When they had all opened, they lasted exactly six days and they began to fade. 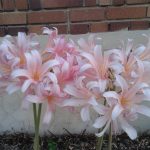 Yesterday, I cut the stalks off and put the dead flowers into the garbage can.

But wait…today, four more green stalks appeared–they are over 12 inches tall this afternoon! With flat heads that are beginning to open.

I did not plant them. They have never grown there before. Where did these glorious bursts of color come from? I have no idea. Thirteen lilies. Birds carry seeds in their mouths and they grow where they fall. Lawnmowers spread seeds of all kinds–just no grass along the side of that planter–just driveway and brick wall. Lilies are bulbs, not seeds.

Be of good cheer…and consider the lilies that burst from my planter. Your favorite genealogist, Arlene Eakle http://arleneeakle.com

PS Happy Birthday to Linda and Jessica in Vermont!

This entry was posted in Uncategorized and tagged Consider the Lilies, Lilies. Bookmark the permalink.